In 1861 the United States immigration rate had reached its highest point. The number of immigrants declined during the Civil War. More Americans moved to the West Coast as anti-Chinese riots occurred in the late 1870s and 1880s. Chinese Massacre of 1871- October 24, 1871 in Los Angeles a white person got caught in the crossfire of two Chinese gangs and was shot. Soon after the crossfire, whites rampaged through the streets breaking windows, knocking down doors, and attacking every Chinese person. Some Chinese people were hanged and dragged by the neck until dead. Around 20 Chinese were killed. 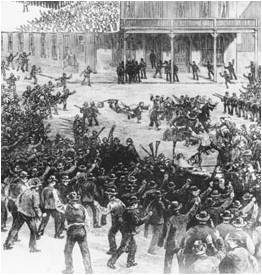 The 14th Amendment was passed in 1868 and states that “all persons born or naturalized in the United States” were citizens. This made former slaves free, which meant that they could migrate and start a new life for themselves. A war was about to begin so former slaves moved to the north because they were free states.